Virtues of a Swordsman 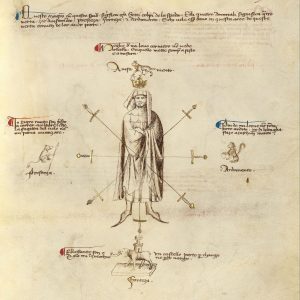 “This Master with these swords signifies the seven blows of the sword. And the four animals signify four virtues, that is prudence, celerity, fortitude, and audacity. And whoever wants to be good in this art should have part in these virtues.”

Fiore’s Segno. That famous page that has an image of a man, presumably a depiction of Fiore dei Liberi himself, with seven swords representing the strikes and thrusts. But it also contains four animals with symbols that represent the virtues one must have in order to fully understand the art, and to survive a sword fight. Here, we will explore the meanings behind the animals and symbols.

The virtues; Fortitude, Audacity, Celerity, and Prudence. You must have all four in order to be successful. One does not work without the other. All four must be instilled in a fencer if they want to pursue the art and survive.

Each animal represents a certain virtue, and the accompanying symbols add an additional information to help you fully understand that virtue. 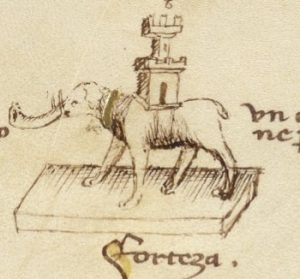 “I am the Elephant and I carry a castle in my care, and I neither fall to my knees nor lose my footing.”

Fortitude is defined as; Mental Strength and courage that allows one to face danger, pain, or adversity. This tells us that in order to be a good swordsman, you must have the mental strength to stand against a person who wants to harm you. It definitely takes fortitude to be able to perform deadly techniques with a weapon against another person who could possibly kill you.

The elephant represents strength, power, and stability. The Elephant in Fiore’s sources has no knees which represents that one “does not kneel” which means does not give up. It may also mean if you were to fall, you most likely will not get back up.

The Elephant also signifies footwork. The text accompanying the Elephant states “nor lose my footing” which tells us one must have a solid foundation and proper footwork.

The Elephant carries a castle for his load. This signifies that strength and stability is needed. The castle may also signify fortification; You must fortify yourself with proper guards and defenses by using the most solid positions and strongest defenses against an attack.

The Elephant stands on a stone platform. That signifies that strength, stability, and footwork are the foundation of the art. 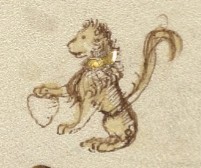 “No one has a more courageous heart than I, the Lion, for I welcome all to meet me in battle.”

Audacity is defined as; Willingness to take bold risks. Confidence. Basically, having the courage to fight, and to have the confidence in your abilities that you can pull off techniques in stressful situations. I would like to add that it could in addition, mean having the audacity to step into the opponent’s attack, which is against human nature, but in reality robs the attack of power and/or beats the opponent’s weapon to the centerline, thus diverting their weapon offline.

The lion represents courage, bravery, ferocity, and boldness. Ferocity is interesting, you must be ferocious in your attack while remaining true to the other virtues. Not easy for most people. Must be unforgiving and unhesitant in committing your attack.

The heart represents the heart of a lion, which reminds you that you must be audacious. It also represents nerve, resolve, spirit and enthusiasm. 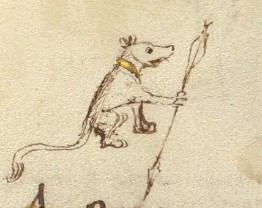 Celerity: Tiger with an Arrow

“I am the Tiger,and I am so quick to run and turn, that even the thunderbolt from heaven cannot catch me.“

Celerity is defined as; Rapidity of motion or action; swiftness, and speed. Being swift and quick allows you to strike your opponent before he can strike you, or allows you to defend yourself before you can be struck. Along with many other facets of fencing.

The tiger signifies fast, graceful and smooth strikes, defenses, and footwork. When the tiger moves, he moves in a graceful manner. His movements are swift but smooth, and moves with confidence.

The arrow represents speed and efficiency. Also, the arrow flies in a path that is the fastest way between two points; a straight line. It represents that your strikes and defenses should also move in the straightest line possible, since a straight line reduces tempo as compared to circular motions or arching.

It is interesting to note that the word “arrow” derives from the ancient Persian word meaning “Tigris” as in the Tigris river, which was known to be the swiftest river.

“No creature sees better than I the Lynx,and I proceed always with careful calculation.”

Prudence is defined as careful, good Judgement, to avoid danger, ability to reason, resourceful, and cautious. Prudence is one of the most important virtues. You can be strong, swift, and courageous, but if you lack good judgement you don’t stand a chance against even the most mediocre swordsman.

The lynx signifies foresight. The ability to understand the thoughts and intentions of your opponent. It also represents cautiousness; you don’t want to be so audacious that you rush into a technique without observing the position your opponent has taken and the most logical actions they would most likely take from that position. In order to have a good dose of prudence, one needs to have a solid understanding of the fundamentals of the art, it’s techniques, and has trained enough to understand the mechanics behind the techniques and an understanding the science behind the fundamentals. The lynx also represents the understanding of timing, which we call tempo. You need to understand the timing of your strikes, defenses and footwork, and that takes prudence.

The compass signifies measurement and geometry. Understanding measure is a cornerstone of fencing. Everything you do will depend on measure and tempo; from the approach to the withdrawal. Tempo and measure correspond directly to the geometry of the sword fight; Having your sword ready to strike from your shoulder has a wider measure and longer tempo than being in a position where your sword is held low and on the center line. Another example of the use of geometry is when you are in a bind, and you move your left foot offline to the left while keeping your hilt on the center of your body as you move but keeping your point directed at your opponent, you will see that their point will be offline and cannot harm you while your point is in perfect position to thrust up the middle. Geometry allows you to use the smallest moves necessary to gain the advantage by understanding positioning with imaginary lines.

Understanding and applying these virtues should be a major part of your training. Having all four virtues, you can achieve a great understanding of what it takes to be a swordsman.